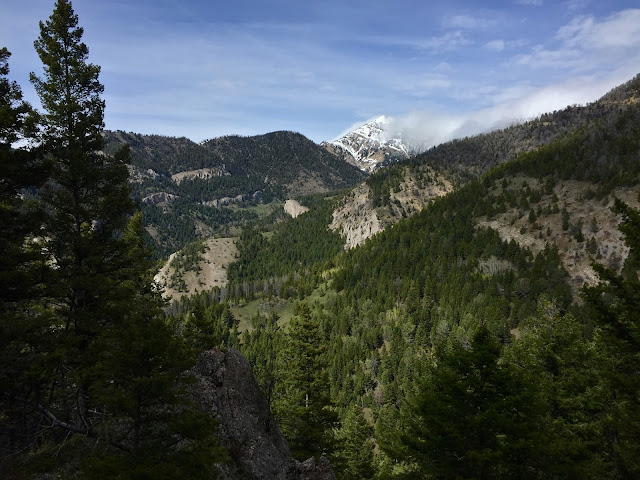 On June 20th, I ran the Old Gabe for the fourth time. Back in 2004 it was my first 50k, and subsequently I’ve run it the last three years. Each year when I’m heading out of the Middle Cottonwood aid station for the second half of the race, I question what brings me back to this race. The Middle Cottonwood trailhead serves as the start, midpoint, and finish of the race, so that turnaround 17ish miles in is both mentally and physically challenging. It doesn’t help that the climb out of Middle Cottonwood towards Sypes Canyon is long and sustained. The Old Gabe is a tough 50k – with somewhere between 10,000 and 11,000 feet of vertical gain, very little of the course is flat. The terrain is spectacular, though, and I suppose that is one reason I’ve run this race so many times. Balsam root, bluebells, and shooting stars abound, and that much elevation gain brings with it expansive views of the Bridger Mountains and the Gallatin Valley. While the scenery and the mountainous course are part of what have kept me coming back, they aren’t the whole story. 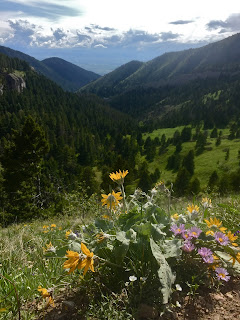 “One gets to see so much country on a day like that, much beautiful country in this case: summits and abysses, those of nature and those of the soul.” (Rolando Garibotti, American Alpine Journal, 2001)*

Mountains, both physical and metaphorical, inspire me. The sublime beauty of mountain landscapes pulls at my soul, and like an addict, the more of this beauty I experience the more I want. Whether with a rope and climbing gear, skis, or trail shoes, I’ve sought to immerse myself in the mountains as much as possible. Mountain environments are often harsh, and that immersion can often bring with it a wealth of physical and mental challenges. Over time, I’ve come to realize that those challenges are what I relish as much as the beauty of the mountainous environment. I’ve also come to realize that those challenges are valuable for living life off the mountain. I believe a brain adapted to the fluctuations of mountain life more readily accepts the inevitable mutability of the human experience.

“I’m truly present when I go to my dark place. It’s a cathartic experience really, to harness and control the pain and welcome the emotions and deep focus that come with it. It’s a special experience and I’m so thankful each time I visit it. It’s almost a healing experience, a reminder that dark times will come and go, and it’s helped me to shift my mindset away from believing nothing good can come during the darkness of depression. Ultrarunning . . . can be a wonderful metaphor and reminder that life is full of pain and joy and are natural paths of the human experience.” (Rob Krar, iRunFar)**

On April 11th, I was skiing on Beehive Peak in the Madison Range with my younger brother Jens and two other close friends when a small avalanche swept Jens over a cliff band. Although I was able to ski down to him in less than a minute, he had died instantly. The past 75 days have not been easy. This is by far the biggest metaphorical mountain I’ve ever had to climb – and perhaps there is no summit. Since that day I have sought solace in the mountains, and have been thankful for the gift of being able to run in them, as I haven’t yet felt ready to step into skis or tie into a rope. There is something about the rhythm of the trail, about pounding out the pain, which is deeply therapeutic, if not ultimately healing. Both training for and racing the Old Gabe have been part of my grieving process.

Old Gabe has gotten the best of me in the past. I’ve dealt with a lot of cramping and general bonking, and it’s always ended up being an exceedingly painful physical experience with an accompanying mental battle. This year I trained more consistently and, perhaps more importantly, rested well. I hoped to run a smart race, the race I felt I was capable of having on this course. Fortunately, conditions were perfect. The day was cool and partly cloudy for much of the race, and an unseasonably warm and dry spring left the Bostwick canyons (typically a rowdy mixture of snow and mud) more or less dry. The first half of the race, from Middle Cottonwood to Truman Gulch and back, felt a little sluggish. I ran most of that with Johannes Middelton, a Bozeman local whom I met for the first time on the initial climb out of Middle Cottonwood. Johannes was powerful on the climbs, and it took discipline to hold back and run my own race. I wasn’t feeling particularly strong at that point, and had to battle doubts about whether I was up to the task of running this course as well as I hoped. I feared the second half of the race, as that’s where the verticality of this race really starts to take its due. If I wasn’t feeling energetic this early on, was there any way the second half would be a different experience than that of previous years? 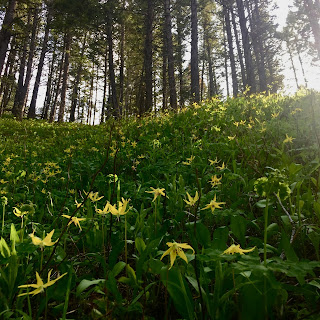 I passed Johannes on the long downhill from the ridge below Saddle Peak, and pulled back into the halfway point at Middle Cottonwood in first place, just under my goal split of 3.08, which surprised me given how I had been feeling. More surprisingly, I felt stronger than I had all day on the leg to Sypes Canyon trailhead. My mindset shifted as I crested the ridge separating Middle Cottonwood canyon from Sypes Canyon, and I began to wonder if I could pull off both a win and a finish time around 5.50. A summit reached, literally and emotionally. The ridgeline has an excellent view of the Spanish Peaks, where Jens died, and my thoughts shifted to my brother. He had hoped to run Old Gabe this year, and I would’ve done anything to see his shaggy blond hair on the course that day.

To secure the win, I was hoping to have at least 4-5 minutes lead on any challengers after the Sypes turnaround. Heading back up the hill after Sypes, I kept checking my watch and wondering how long it would be before I saw another runner. I was relieved when I passed Johannes almost 10 minutes after leaving the Sypes aid station, knowing that apart from an unprecedented blow up, I’d at least win the race. Although the blow up didn’t happen, the cramps started to set in, and I was moving back up the canyon a lot slower than expected. I watched my hopes of running 5.50 fade by the mile. When I got to the top of the ridge above Middle Cottonwood, I had 25 minutes to cover three miles if I was going to pull off a sub-6 hour race. I knew it would take a smooth descent to make that happen, but my calves, quads, and hamstrings all rebelled, seizing up in a megacramp just as I started back down the ridge. I had to stop for 30 seconds to let it subside. Once I could move again, I started pounding the downhill, doubtful I would still be able to break six hours with that setback, but still determined to try. With almost two miles to go I was elated to see my 9-year-old son, Haaken, running up the switchbacks towards me with a huge smile on his face. “You’re in first place, Dad!” He turned around and ran down the rocky single track with me, keeping up for a half mile before he stopped to catch his breath. Somehow, I crossed the finish line a few minutes later in 5.59:11.

Once again, Old Gabe did not disappoint. The views and flowers were outstanding, and I found what I came for, a brief exploration of the “summits and abysses of the soul.” Congratulations to everyone who ran the Old Gabe this year, and especially to Becky Wheeler who broke the women’s course record with a time of 6.54 (and placed sixth overall), and to Johannes Middelton, who kept me company for the first half of the race, and finished strong despite severe cramping.

Dedicated to Jens Hagen Anderson (1/7/1987 – 4/11/2015). Your mountain-shaped soul inspires me to live life fully, to love unconditionally, and to keep pushing for the summit.

*In August of 2000, Rolando Garibotti completed the Teton Grand Traverse in 6:49, almost an hour and a half faster than the previous fastest time. The Grand Traverse reaches the top of 10 Teton summits over a course of 13.5 miles and includes technical rock climbing up to 5.8 in difficulty.
**Rob Krar is an accomplished North Face ultrarunner, who, like Bozeman’s Nikki Kimball, has been refreshingly open about his battles with depression and running’s therapeutic role for him.