Trail running brings highs and lows, stunning beauty and mud-soaked humility. Overcoming the lows makes you savor the highs. Perseverance is gold. A month ago, the 2014 North Face Endurance Challenge offered everything a trail runner could ask for and a handful of Montana runners were lucky enough to make the trip. I caught up with a few of them who shared some insight into the NFEC experience.

So why go all the way to California for a run? The main reasons for most of the Montanans I heard from included:

Come race week, the adventure quotient increased a few notches when weather forecasts called for a “pineapple express.” Things cleared up surprisingly well at the race, but the damage was done. 5 inches of rain that week was a blessing for drought-stricken California, but a wild card for runners. It mattered little if it was coming down during the actual race or not, things got interesting. Half of the trails on the 50 mile course melted into sloppy mud, with one particularly memorable descent featuring a mud river. Missoulian Babak Rastgoufard, running the North Face 50 for the first time, called it “fun and beautiful.” Like most runners toeing the line, Babak looked at the rain coming down and worried about having to don rain gear for 50 miles. But right on schedule with the starting gun, he recalls how “the rain stopped and the clouds parted, eventually allowing the moon, stars, and ocean to show themselves.” Even more impressive were the runners themselves. With a 5:00 am start, he was awed how “the line of headlamps making their way up the Bobcat trail made for a beautiful introduction to a great day of running.”

Mike Foote has run the North Face 50 several times but appeared every bit as stoked at the start as he is at the Montana races he directs. His trademark grin was as big as ever, but his game face was not far behind. The next time we crossed paths on an out-and-back he was a marathon deep and hanging tough in a strung out lead pack.

MTC’s Kristina Pattison also made the trip to California looking to make a splash against the best runners in the business.  Lined up with the elite start she remarked that “the tense atmosphere bubbles with the excitement, confidence, and apprehension of smiling faces familiar from iRunFar.com interviews and UltraRunning Magazine covers.” But like all entrants, the unique nighttime atmosphere was the real treat. “I let myself focus on smooth, relaxed running and made an effort to enjoy the scenery barely perceptible in the shining light of the full moon and glowing lights of San Francisco. A stream of headlamps ahead and behind traced the road cut in the rolling hills, a uniquely memorable sight.”

Other Montana athletes competing in the 50 mile included John Fiore, Meaghan Brown, and me. Whitefish photographer and UM Alum Myke Hermsmeyer also made the trip to capture the action as it played out. Even the Drobecks–Andy (the super speedy triathlon pro and stair-climber extraordinaire) and Trisha (Missoula Marathon course record holder)–came down to run in the half marathon. As Trisha explains it, their trip was as much about a well deserved get-away as the race itself:

Our hours and miles of training also decrease drastically for a few months in the winter. It’s during these blustery months, during this ‘break’ that we regain our passion for sport while maintaining a base so when February rolls around, you are ready to rock and roll for spring training. And (bonus!) with more time freed up with less training, we get to see each other (and our friends) more. Winter races are usually limited to Turkey Trots or small local ventures sporting traction devices in some heinous blizzard. But this year, we wanted to get out and try something new, so westward ho! Here we come San Francisco & the North Face Endurance Challenge (trail half-marathon) or BUST!

In their three short days in the Bay Area, the Drobecks also competed in the tourist “endurance challenge.” According to Trisha: “Goal for the weekend: Be super tourists… and get in a good hard effort for the race on Sunday morning.” The Drobeck sight-seeing whirlwind included trips to Alcatraz and a local cat-themed establishment. Come race day Trisha even sported her “Grumpy Cat” mini dress in lieu of her typical race kit. Despite all this, the pair still earned themselves spots on the podium. 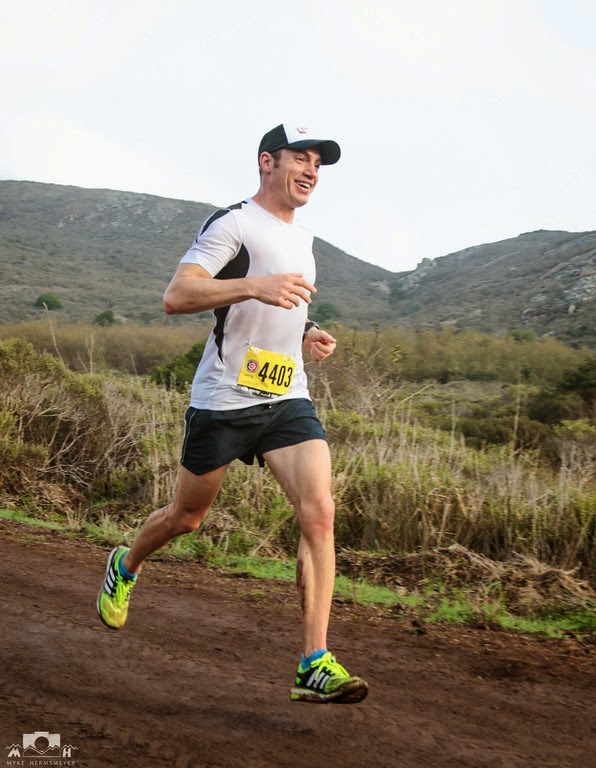 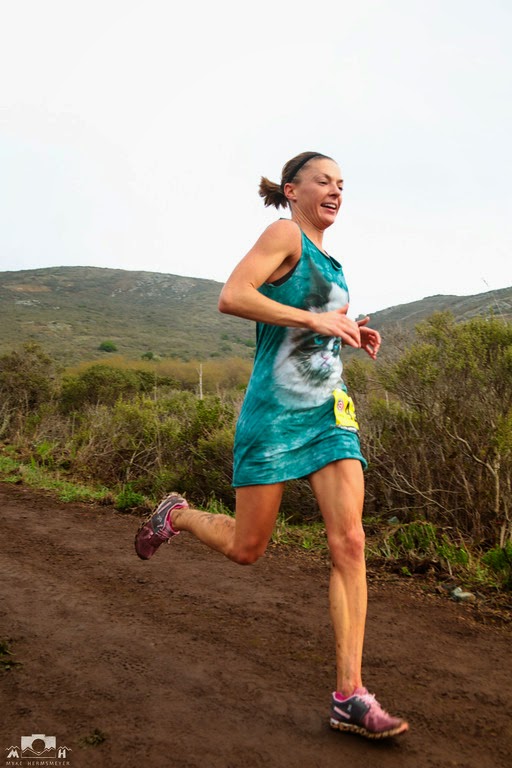 The simple pleasure of running fast in an amazing place is undeniable. The joy that comes from the physical and mental battles of 8 hours and 50 miles of rain slopped trails can be a little tougher to grasp.

For some of us, the climbs got a little bigger and mud a tad bit deeper even before we toed the line. According to Kristina, “training included weeks of sub-freezing temps on snow.” But she also faced a head cold and a 17-hour drive to California. Like Kristina, life got in the way for me too. Simply put, I botched my taper! A number of things contributed to this, but moving (yes, hauling boxes for 12 hours) Thursday before a Saturday morning race was a bad idea, but I suspect that a few late nights at work and a brutal night’s sleep at the Marin Headlands Hostel didn’t leave me feeling any fresher. In fact, standing at the start with trashed legs made me feel like I had already finished the race. But to be honest, standing there in my giddy sleep-deprived daze and the nervous energy of race day, I knew there was no better place to be. I’ve never met a distance I didn’t like and racing my first 50 mile meant venturing into uncharted territory. New goal: finish!

As my race played out, I had few rough patches but dropping out was never really a consideration. It’s not like I was hurt or sick, just tired. Kristina reported similar feelings. “I couldn’t remember feeling worse in a race,” she says, “and I started to seriously doubt the idea of ever having a “good” race. I forgot about top-ten. New goal: just finish.”

So in the muddy fog of the Marin Headlands, exhaustion, head colds, ….whatever. Hundreds of runners, including a few of us Montanans, pushed on amidst our own personal battles. But even though the race was ours, the support of spectators and volunteers made it a community effort. That’s where Team Montana comes in. As I worked my way up the last mud-slopped climb Myke was there rooting me on as he shot picks of my muddy racing flats; at a couple remote aid stations it was Drew Pattison (Kristina’s husband) cheering; seeing Foote, Babak, Kristina, and John on the out and back put a spring in my step. Why not just enjoy the run, lose a toenail or two, and charge into ski season satisfied. That’s what I did.

Kristina, on the other hand, was still battling for a top-10 finish late in the race. When she spotted Babak with just a couple miles to go she was relieved and thankful. “He was there in his red shirt, like a small gift under the back of the Christmas tree. ‘Come on Babak, let’s run it in.’ He started to jog, and I felt stronger immediately.” With the subtle camaraderie of the Montana running community and Babak there to push her, Kristina crossed the line 10th woman overall. Perseverance is gold.