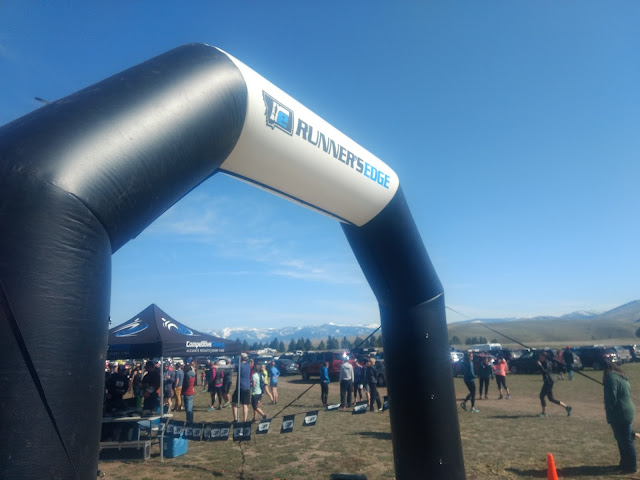 Under clear April skies, a spirited field of 600 runners descended on Lolo to kick off their 2018 trail running season with the Runner’s Edge’s Bitterroot Runoff. Like the green grass sprouting along the mountainside course, athletes in the competitive 10 miler showed the first signs of their spring fitness after a heavy Western Montana winter (the mountain snowpack in the region is currently sitting around 175% of normal). The event–part of the Runners Edge’s Trail Series–attracted an extremely deep field with top regional runners shaking loose the cobwebs while obliterating course records.
The competition came by design. According to Forrest Boughner, Runner’s Edge Race Director, “We’re doing a better job of reaching out to some of the more competitive top local runners and trying to get local runners racing local.” Boughner explained, “there’s a bigger contingent up front, which gets everybody excited.”
As it happened, the  race winners each took the same tactic to earn victory: lead from the gun. Missoula’s Mark Messmer and Nicole Murray of Whitehall both set hard early paces on the initial 4-mile climb and held on to gap the field enough to raise the bar for what’s possible on the course. In fact, the top four women and top five men all finished under the previous course record marks.
Boughner called the women’s field “one of the deeper fields we’ve seen at a trail race in Missoula recently” with names that often appear on podiums at regional races going some 15 deep. Besides Murray, a past member of the U.S. Mountain Running Team, second place went to Lauren Arnold and third to Amy Friedman. Arnold’s career highlights include being a USATF National Champion in the trail marathon and finishing runner-up at the always-competitive Pikes Peak Ascent. Friedman, meanwhile, has been a mainstay on the local trail scene since moving to Montana a few years ago.
One the Men’s side, Messmer was unmatched. A dominant force in Montana road racing, Bitterroot Runoff served as the former UM Grizzly’s trail racing debut. His 59:46 cracked the 1 hour barrier and put him nearly 2 minutes ahead of runner-up Patrick Murphy, who’s in the midst of training for June’s Bighorn 100. Nico Composto, the 2017 Treasure State Trail Series Champ, having recently overcome some injury setbacks raced conservatively, moving up through the pack throughout the race before finishing third.
Full Race Results can be found Here.
While Boughner expressed excitement with how the race played out, he considered the sunshine to be key to the event’s success. After a long winter, most everyone seemed to agree.
The next stop on the Runners Edge Trail Series comes on May 20th with 11 Miles to Paradise. Runners Edge has assembled an equally impressive field for that one. Check out the videos below to learn how the race played out and what some of the top competitors are doing to prepare themselves for the season: