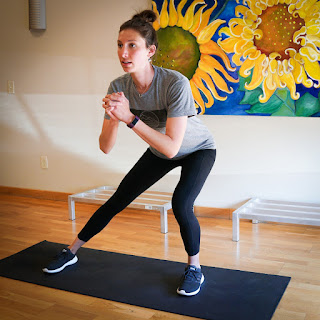 Maddie Small, Alpine South physical therapist and runner.
We all know, deep down, the best way to get better at running is simply: running. The more times you hit a pace or climb a hill the easier and more natural it feels. Running regularly results in improved cardiovascular fitness and can contribute to a lower body mass. Unfortunately (or fortunately for some), cardio and skinny jeans are not everything. Voluminous training, track-worthy workouts, and the genetic engineering of a racehorse mean less if your body moves like a poorly designed droid from the early Star Wars saga.

“My legs are not moving. I must need maintenance.” — Battle droid with the body of a C-3PO.

A runner who uses more energy to move at the same pace as another runner has a lower running economy, resulting in earlier fatigue and eventually a slowing in pace. Economy can be determined in a lab by measuring oxygen consumption–an essential ingredient for energy production–at any pace. But in real time, an improved running economy results in a lower level of perceived exertion at the same pace. Running just feels easier. Try these activities for improving your running economy without actually running:
PROGRAM THE BASICS
Appropriate training can lead to improved recruitment of existing fibers within a muscle to create stronger contractions. Early on when trying something–like lifting a heavier weight or running at a faster pace–performance varies significantly and efficiency is low. During the first six to eight weeks of a training program, substantial improvements occur in force production due to improved neuromuscular activation of muscle. Initially, it is important to perform simple movements consistently and correctly with most major muscle groups. As the body becomes more adept at these movement patterns, more stimulus is needed to see increased gains.

FOR EXAMPLE: Some foundational movements include the squat, deadlift, lunge, side lunge, step up and heel raise.
GOAL: For the first two months of a training cycle work up to several sets of less than 10 repetitions with a moderate (greater than 70% of one-repetition maximum) resistance. If you have little experience with lifting, body weight alone is enough resistance. With time, you can progress the difficulty with increased movement excursion, or adding resistance and lowering reps (see below). You can also progress to performing them on a single leg or balancing on a single leg between lunges and step ups. Perform 2-3 days of strengthening each week with at least a day of rest between.
UPDATE THE SOFTWARE
After the initial months of increased force production due to improved neuromuscular recruitment, the muscle will continue to adapt to moving heavier loads if more resistance is applied. Contractile elements and physical size of the muscle may increase contributing to structural hypertrophy. This may be beneficial in some muscle groups that will be pushing our body weight uphill and absorbing approximately three times our body weight in force as we descend hills–think Kilian’s quads. However, there is a point where larger muscles eventually become detrimental to the running economy.

“I got a baaaad feeling about this.” — Han Solo or anyone in every Star Wars movie ever.

FOR EXAMPLE: Continuing to challenge most major muscle groups with the basics (as above) you can increase resistance with free weights, kettlebells, backpacks, etc.
GOAL: Increase resistance to a level that will cause mechanical muscular fatigue within less than 6 repetitions (for example 4 sets at failure within 3-4 repetitions). Several sets of these may result in decreased reps to fatigue as well as muscular soreness, which are signs you’re working with enough weight.
BOOST THE POWER
After a period of hypertrophy, when the structural and metabolic development of the muscle is at its peak, a bout of power-specific training prior to the racing season can lead to further mechanical efficiency. Plyometrics are particularly helpful for runners to develop explosive power in the muscles of propulsion while honing the elastic energy stored in tendons of the lower leg. Long tendons like the achilles attached to pennate-fibered muscles like the gastrocnemius are particularly well suited to maintain energy economy but are also at risk for injury when this type of force is applied too abruptly or too often.

Increased rate of force development is especially important for short bursts of high-velocity running and for maintaining acceleration uphill. Increasing velocity of contraction is particularly risky in the untrained athlete,  but can lead to substantial improvements in performance during high-speed pursuits.
FOR EXAMPLE: Using similar movement patterns as your routine strength training try: squat jumps (jump up as high as you can from a squat position), tuck jumps (jump up and pull knees to chest), single leg dead or step up to a single leg hop for height, scissor jumps (alternating lunge jumps), or box jumps with both legs or a single leg box hop.
GOAL: Consider adding plyometrics gradually–measured and progressed by number of contacts–by starting with two legged jumps and progressing to single leg hops. For those with more experience, this may include progressing further with increased height, speed, or direction changes.
MAY THE FORCE BE WITH YOU
In addition to a regular running routine, try these steps to improve running economy for your most stellar season yet.
EXAMPLE PROGRESSION

Kristina Pattison is a Missoula, Montana based runner currently focused on mountain, ultra, sky, and trail (and catching up on Star Wars). Locally, she works as a physical therapist for Alpine Physical Therapy Downtown and specializes in gait analysis and rehabilitation for runners of all abilities. She is board certified in orthopaedics and is certified as a specialist in strength and conditioning. Kristina runs for the La Sportiva Mountain Running Team, and is a columnist for Mountain Running Magazine. www.kristinapattison.com

Maddie Small is a Missoula, Montana based runner and triathlete who works as a physical therapist for Alpine Physical Therapy South. She is the clinical director for the Fit to Fight program for those with cancer. Her clinical interests include general orthopedics, strength and conditioning, sports rehabilitation, and oncology.